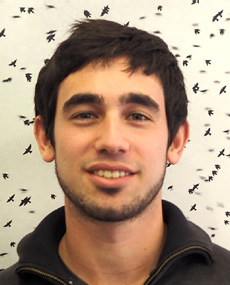 Nico is a Ph.D. student co-advised by Prof. Shahar Kvatinsky and Prof. Eilam Yalon. He received a degree in electrical engineering (5-year program) from the Universidad de la República, Montevideo, Uruguay, in 2014. His research focuses on reconfigurable radiofrequency circuits using high-performance switches based on emerging memory technologies, such as phage-change memory (PCM), resistive RAM (ReRAM), and conductive-bridge RAM (CBRAM). Currently, he is working on the development, fabrication, and modeling of high-performance PCM RF switches as well as circuit design and fabrication of reconfigurable RF front-end circuits based on these devices.

Nico was a recipient of the 2020 IEEE Electron Devices Society Ph.D. Student Fellowship, the 2020 Yablonovitch Research Prize, the 2020 RBNI Prize for Excellence in Nanoscience and Nanotechnology, the 2020 RBNI Scholarship, the 2019 Jury Award for Outstanding Students, and the Excellence Scholarship from the Andrew and Erna Viterbi Faculty of Electrical Engineering, Technion—Israel Institute of Technology, in 2018, 2019, and 2020.

Teaching has also played an important role in his career; being involved in teaching activities since his B.Sc. in Uruguay. He was a TA in Physics and EE courses at the EE faculty, Universidad de la República. At the Technion, he is a TA in several courses, such as Introduction to VLSI and Advanced Architectures and Circuits using Memristors. He was also a TA of the Advanced Analog Integrated Circuit Design course, given by Prof. Willy Sansen (KU Leuven). In his free time, he enjoys running, playing football, going to the beach, and traveling.